Lunchtime is often difficult while traveling, especially in more expensive towns. We don’t want to spend too much, either money or time at a sit down place; nor do we really need that much food at every meal. Cooking in the apartments as we travel is good, but it can’t be done every meal and still have time to go sight see. This dilemma is how we stumbled on a great little sandwich shop in Brussels. 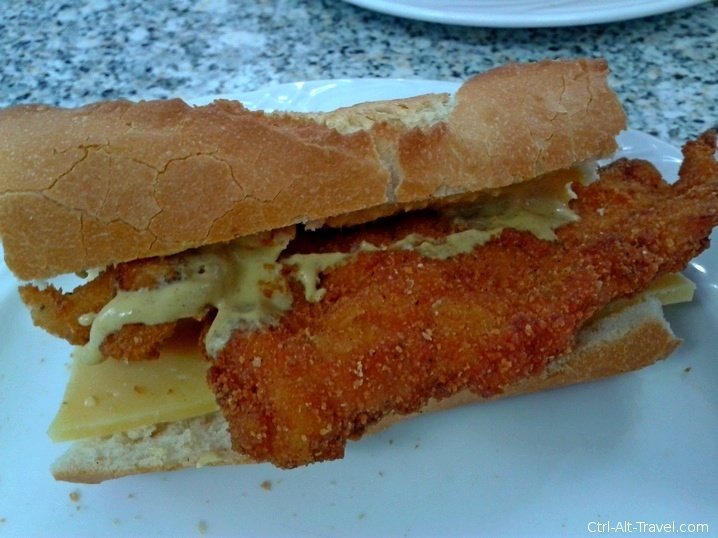 Ali and I decided to go back to Zaabar to get some chocolate. We had been there last summer on our press trip to Brussels and liked the weirder flavors they put in their chocolate so decided to get some more. We wanted to head out to Mini-Europe afterwards, but needed lunch first. We wandered from Zaabar toward the Louiza station looking for food. I had walked the route in Google StreetView looking for things, but other than an impression of cafes I couldn’t come up with anything concrete.

We walked up the street checking out places. There certainly were plenty, but nothing really seemed to hit the spot. Some were not even open yet at noon. A few not open on Mondays. We walked down a side street toward a group of cafe umbrellas looking at menus. 17Euros for a hamburger seems very high and more food and time than we really wanted to spend. So we kept walking.

Another menu of fancy French food that would push our bill over 50Euros for lunch together and we were beginning to lose hope. We decided to just keep going and turned a corner. I saw a Greek flag and thought about a nice gyro sandwich, so we moved that way. It turned out to be just a grocery store. Next door however was a store front with no big sign and a simple name Snack Sandwiches on the large plate window. It also had a line out the door and down a ways in a street full of nearly empty restaurants. Well, if the locals like it, then it can’t be bad.

Looking through the window, we saw a guy putting in a few fresh racks of baguettes to bake. Fresh bread sounds good, so we decided to stand in line.

Inching Toward The Counter

We were committed, there wasn’t really anything else around we were willing to take a chance on. The line definitely said that this was a local favorite so we stuck it out. As the line inched forward into the store faster than you might expect given the length, we realized there was no menu on the wall. Umm, in a language we are not familiar with, it is nice to be able to muddle through the menu together ahead of time without upsetting people behind us. There were Italian colors on the sign, maybe it wouldn’t be so bad to just pick something.

The front room is dominated by a deli counter on one side with the bread baker in the front corner. The line of people snakes between the sandwich counter and one full of drinks. A man and woman energetically work behind the deli churning out sandwiches to the line of people. Another man runs back and forth between running the register and passing drinks back to the dining room crowded with small tables in the back. A sign proclaims that the garden is closed. The walls are clean and painted purple and a shiny espresso machine stands behind the counter as well. Two signs, one in french the other in English, tell patrons that staying in line is required, implying in stern language that there is no table service for food.

We finally get up closer to the counter and can see in. There is a several page menu taped to the front of the counter which looks like it is printed from a computer, no fancy printing job. So many people jostling about added to the difficulty of reading French made the menu all but useless. It came down to point-and-grunt as we were next to order. 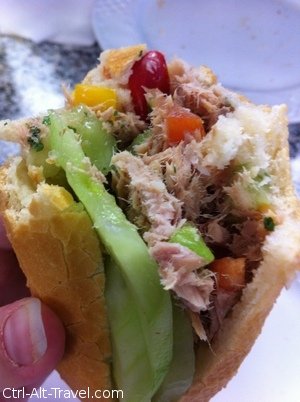 Since the menu was of little help, ordering came down to point at something amidst the array of meats both sliced and prepared in the case. Piles of cheese and bins of sliced vegetables crowded the rest of the space. Spoiled for choice meant going with the familiar.

I had spied metal bins of schnitzel like chicken patties in the back and pointed at that. The man nodded and sliced a baguette in half and began to stuff several breaded chicken slabs into the bread. He asked me “Sauce? Salad?” I was able to work out in a mix of my remembered high school French and his English understanding to get cheese and mustard on it. “No salad?” he asked again. “Nope, perfect the way it is,” I replied. I was able to understand the question for “here or takeaway” and indicated we would be hanging out in the back. He sliced the sandwich in half and put it on a plate for me. Ali pointed at the tuna mixed with peppers and got a similar sandwich on a plate to mine in only a few seconds.

We found a table in the middle of the dining room and sat down. A few quick questions to the man running back and forth and we got some drinks. Finally able to sit in relative quiet with our meal I began to marvel. “Why don’t we have a place like this in Freiburg? It reminds me of the delis I had gone into as a tourist in New York City a few times. Efficient and specialized on one thing; good sandwiches.”

I devoured my sandwich. The chicken was juicy on the inside with crunchy fried outside bits. The bread was still warm as well. I started watching people and the line through the front window. We had been waiting for less than 20 minutes and sat for another 15. The line never seemed to reduce in size as more people came to replace those who left with their sandwiches bundled under the arm.

Finally it came time to pay and head to Mini-Europe. We walked down to the register and told the man what we had just enjoyed. The total for 2 sandwiches and 2 soda cans came to 10.10Euros. Wow! Less than half of one of the hamburgers at a nearby cafe and we had both eaten our fill. This was nearly on par with our street market sandwiches in Amsterdam, but with inside seating.

I asked the guy quickly how long they had been in business. From the decor I was expecting a few months. He called a woman who had given us drinks and had been sitting and talking up in the dining room. She answered in great English, “Since 1999.” 14 years and still the line is out the door. They don’t need decorations or a fancy menu it seems. The locals know the place and now so do we.

We enjoyed it well enough that on our last day in Brussels, we actually bought additional tram tickets just to go the 30 minutes in the rain from our apartment to the sandwich place and back for another round. Even with the cost and time, it ended up better than had we tried to sit down elsewhere. Even on this rainy day the line was out the door.

It is a bit away from the center, but if you are in Brussels head out to the Louiza metro stop and hit up the best sandwich in town.

It is on Rue Dejoncker only a few streets from the Louiza Metro Stop. Here is the Streetview link: sandwich place.

Anti-Disclaimer: Before anyone thinks we were paid to say these things, nope. The story is true. We just wandered and found this place and it was so good. They had a line out the door, why would they need our help?