“What are the ingredients of a sorbetto?” asked the energetic Japanese woman, Makota, who was to be our instructor for the afternoon at the Carpigiani Gelato Lab. She spoke wonderful sounding Italian, but not English.  Our guide, Stella, acted as interpreter, and I got a chance to work on my Italian as well. We had just come into the lab which is a working gelateria where students hone their craft. It is across from the main building of the Carpigiani Gelato University where the Gelato History Museum is located.  At the lab we got a chance to learn a little about making sorbetto for a few hours and have a lesson of our own. 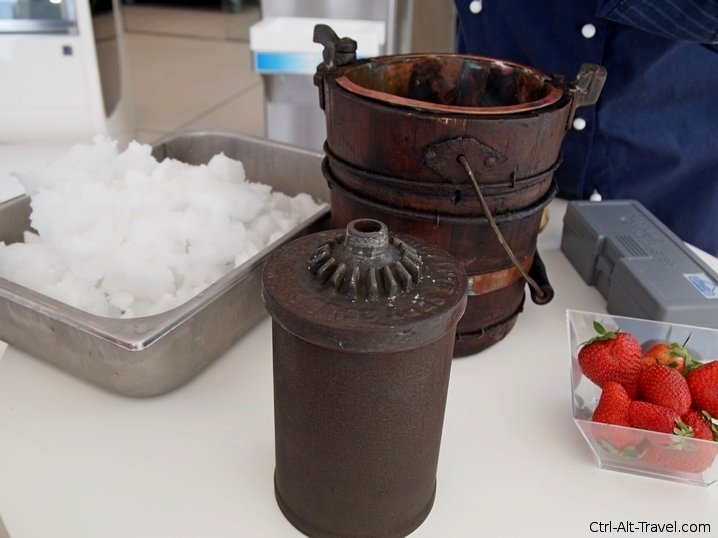 Gelato is cream based and has milk and sometimes eggs, while sorbetto is water based and usually flavored with fruits. Gelato mixes must be pasteurized due to the milk and eggs used, so they take longer to make. Since our lesson was only a few hours, we got to make two different sorbetti. Sorbetto is the italian word for what we call sorbet, as somehow we have acquired the French term.

“Water, sugar and fruit,” we answered the ingredients of sorbetto, which we had just learned a few minutes before in the museum, and the lesson was off and going. The ingredients and basic process for making this kind of frozen dish have not changed for a thousand years, since the snow and ice moved from being an ingredient to just the way of chilling the mixture.

Our instructor had prepared a strawberry sorbetto mix and a banana sorbetto mix. Once we could list the ingredients we got our hands cold and put together an old hand crank gelato machine. The strawberry mix got poured into the can and the can inserted into the copper lined wooden bucket. Then we pressed crushed ice and poured salt around it. Then the top was clipped on and I was told to crank. My parents had a similar device when I was a kid. I was having fun. 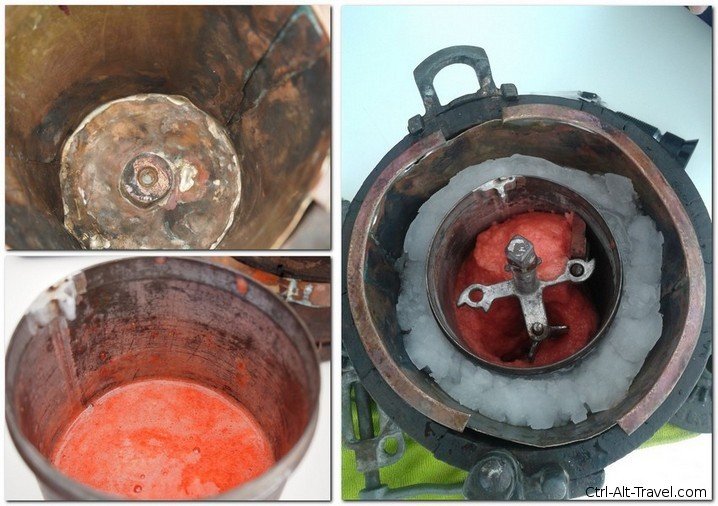 As I was cranking away, Ali was given the task of pouring the prepared banana sorbetto mixture into the modern day machine. I was experiencing how it used to be done while she was doing it the modern way. A machine can finish a batch in 7 minutes, so I got to stop the handcrank after about 10minutes. It can take 30minutes for it to be done right, but even after 10 we could see the beginning of the sorbetto forming.

Due to time, we just scooped out the banana to try. The banana sorbetto was smooth and creamy. Had I not been told I would have guessed that there was milk in it. Nope, although a few more ingredients than our strawberry concoction, but no dairy. We sat down with our cones of banana sorbetto and our instructor started talking recipes and chemistry. Gelato, science and math? Yup, I was having a blast.

The point of making gelato and sorbetto is balance. The main ingredient is of course your fruit. Depending on the strength of the fruit you are working with the sorbetto mix is anywhere from 15 to 70% fruit. Certain fruits like lemons are too strong to put too much fruit in. Most fruits fall in the middle category where about half the mixture is fruit. Orange apparently falls into the weak category which surprised me.

The mixture is then sweetened. Depending on taste, sugar is roughly 30% of the mix. The cool part here is that you have to account for the sugar already in the fruit. Our instructor had a little device called a refractometer which measures such a thing. Smear fruit on the window and look through the eyepiece and it shows you the percentage which is sugar. Some math later and you can calculate the amount of extra sugar you need.

Here is where our banana sorbetto differed from the basic strawberry. It had a little bit of lemon juice (1%) and a few grams of a natural stabilizer. This is apparently what gives it the creamy texture without cream. Though these are more professional ingredients and would not be needed at home. The rest of the mix by percentage is water. There was a fair amount of math, but each piece was a range. Knowing the basic recipe meant that you could play with it back and forth.

After this rousing lesson of chemistry we got to move to the case and try some of the flavors that students had made. Most were true gelatos with cream bases, but not less delicious for it. The only “weird” flavor was the ricotta, but I couldn’t taste much of the cheese in it. My favorite flavor was Cafe Antico, a coffee flavor made based exactly on a 1000 year old recipe.

As we were preparing to catch our bus back to Bologna we asked for a simple recipe use at home.

Adjust the sweetness by raising or lowering the sugar, but change the water accordingly. You should end up with 1000g (about a liter) of mix. These are all based on percentages, so feel free to cut it in half.

Get two large metal bowls, one smaller than the other. The smaller should still be big enough to contain your mixture with room to spare. Put the mix in the small bowl and fill the large bowl with ice and salt. Let the mixture sit for 2-3 minutes, then rotate and scrape down the sides of the inner bowl. Repeat for 30-40minutes until you hit the solid-like consistency. They suggested it as a fun after-dinner thing for a party where each person around the table takes a 5 minute turn.

Thanks to Stella and Makota from Carpigiani Gelato University for hosting us and Emilia Romagna Tourism as a part of the Blogville project for setting it up. All opinions are my own.

The Best Sandwich in Brussels Nice Castle Hill : Looking Down on the Riviera From Above