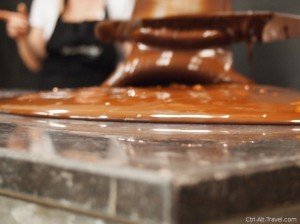 While we were in Brussels after seeing the flower carpet from above, we headed to a chocolate store called Zaabär. There we got a chance to take part in a chocolate workshop. Belgium and Brussels have a lot of their identity wrapped up in chocolate and chocolate-making. The most fascinating part of it for me was the demonstration of the tempering.

That is my fun cool angle of the chocolate down on the marble slab. Our guide translated into English while the cool chef at Zaabär described the tempering process. It is the idea of cooling the chocolate to a very specific temperature slowly enough not to miss the temperature. They have machines that do it, but the traditional method is to spread the chocolate on a marble slab. This was real show.

The first step is to pour the chocolate from the big vats that melt the chocolate at a high temperature into a bowl. The vats melt the raw chocolate pastilles into a liquid state. So now the chocolate has to be cooled to a specific temperature, but in such as way that it doesn’t cool down too fast. It has to do with the end texture of the chocolate.

There is a bunch of cool science about crystals and such behind this, but even still was awesome to watch.

This first step is the pouring. The chef grabs the bowl and tips it up pouring the rich chocolate onto the marble slab. In its heated state the smell is heavenly.

So for the next few minutes he moved the chocolate back and forth on the marble. It gets spread out and gathered back into a pool. He works fast but confidently, the chocolate moving where he points with his tools. Occasionally he dips a gloved finger into the mix and rubs some on his lip. The proper temperature is pretty close to body temperature, our guide Julie translates. Testing it on the lip is the easiest (and tastiest) way to check.

Although the chocolate starts out pretty liquid-y, as it cools it thickens. So after just a few seconds as the scraper pushed through the chocolate, it makes waves. That was really fun to watch.

From Bowl to Bowl

From bowl the chocolate comes and to bowl it returns. After a few minutes of working the chocolate back and forth on the marble, he declares it ready. A few deft movements of the scraper and the chocolate is rounded up and scraped back into the bowl. With a twist of his wrist he sets the bowl on the marble and gives it a spin, just a last bit of flair to the whole process.

This was a great show to watch. It is a crucial part of the chocolate making process, so in some way purely practical part of business. But for us in the workshop it was done with such flair that it was an art performance to watch. The dance of the chocolate and the man.

Last picture of the final bowl is Ali’s. My camera ran out of battery near the end of his show. I was quite upset, but she came to my rescue as always.

Check out Grounded Traveler later this week for more about the rest of the workshop.