Home » Europe » Belgium » Brussels » Of Frites and a Belgian Waffle

Brussels and Belgium is known for a great many things. A lot of them are food related. Belgian Chocolate and Belgian Beer are certainly well known, and for good reasons. Even what we call “french fries” actually come from Belgium and called Frites. So we knew when we were headed to Brussels for a few days that Frites had to be on the menu. But what I was looking forward to the most were Belgian Waffles. A big thick sweet doughy waffle with sugar on it. We were there several days and I nearly didn’t get one.

On our first day in Brussels we got a quick tour of the center. We saw the Flower Carpet and got to stand on the balcony amongst the statues of the Brussels city hall. Then, since part of our group had not had time for lunch, we sat in the shade and talked over a some Frite. 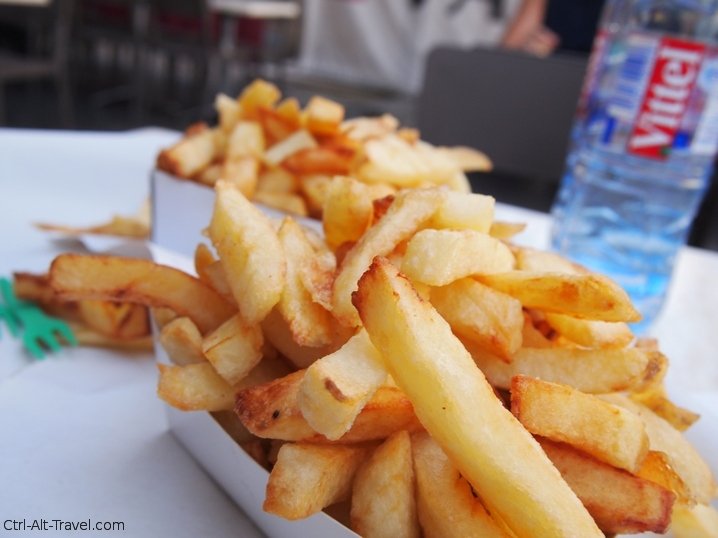 This friterie had a number of different sauces available to dip. Since we had a group, we were able to get them all (and not seem greedy). I was near the back of the line chatting with our tour guide. He mentioned that they have a very spicy one. This piqued my interest so I asked him to order me a tub of the spiciest stuff they could manage. It was actually pretty good. A nice heat to go with the fried potato.

Other options were more typical ketchup and (for Europe) mayonnaise. Some garlic goo and a form of pickle dip. That tub was down the table from me so I didn’t immediately pick up on it. It is apparently a well known local thing and so of course the table had one tub. Not for everyone, I was told through the grapevine of the group. I normally don’t like pickles but wanted to try it. So I passed a fry up to be dipped and handed back. I thought it was tasty. The goo is an orangey color with pickle bits in it. Tangy and although good on a fry not something I would eat an entire portion of fries with that alone. 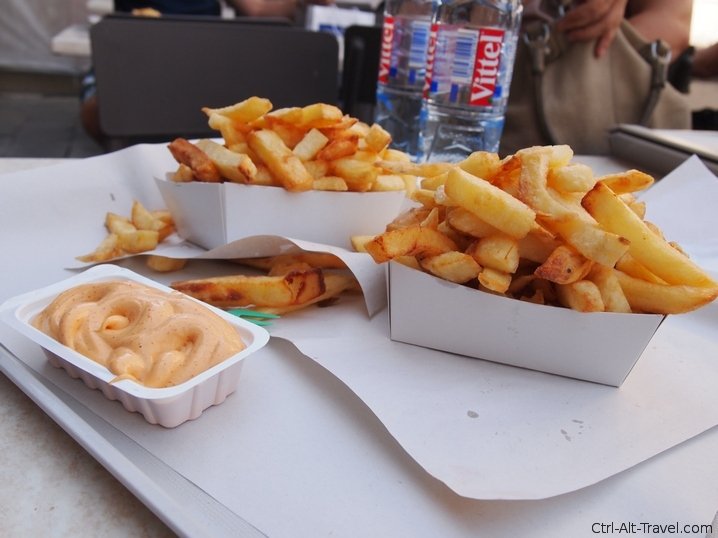 Even the friterie sign was artistic I thought. I learned later that part of the tour got skipped for us to have time to eat Frites, but it was a good use I felt. I like trying local stuff and sitting with interesting people far more than the touristy and sightseeing things sometimes.

And a Belgian Waffle

The waffle had been calling me though. We walked by so many different places, but as the group kept moving and I had eaten lunch I couldn’t make myself stop to get one. As with most things, I convinced myself there would be plenty of time. This continued until it was nearly too late.

As Ali and I went traipsing around to catalog the various peeing statues of Brussels, we kept running into waffles as well. So many of the shops had displays set out of a bunch of waffles with different toppings. I remember this from an episode of the Amazing Race a few seasons ago. It is some form of advertising and enticement. This particular display was right next to the Mannekin Pis. I might even have gotten a waffle there if it hadn’t felt SO touristy or been mobbed by a crowd of Asian girls taking pictures with the waffle display. Somehow that just was not the “Belgian Waffle Experience” I had been craving. So I decided there would still be time.

So on our last day as we were all heading back to the hotel to disperse to our trains, I realized that I had still not had my waffle. This was unacceptable. So Ali and I scurried through the streets looking for a waffle stand. Again as normal when I wasn’t ready there were tons of stands to see. By the time I needed to find one, I couldn’t. Finally we turned a corner and saw the waffle pattern outside a store.

If you are used to more American waffles that get poured into the griddle to be cooked, the Belgian style is different. The dough is THICK. Think the consistency of cookie dough with big chunks of sugar through it. And instead of being poured, a glob is stuck onto the griddle. It does spread, but not all the way out, hence the sort of cut off corners. The sugar globs caramelize on the outside of the waffle. It is topped with your choice of stuff and eaten warm. I wanted to really taste the waffle, so picked just powdered sugar. This style of waffle is from Liege and called the same, but is really common all around Brussels (until you really need to find a stand).

I finally got my waffle and it was great. I only had the one so I can’t really compare, but I think I would have liked it cooked a bit more. The inside was a still a bit doughy. Since the dough is so thick, a Liege Waffle is more filling than it looks. I am sure with calories to match. I can only imagine what it would be like with some of the other toppings I saw on display. Hmm I wonder if they would do a Frite-Waffle combo?